The "nature" through sequence of movements

Most of the time I was distressed when my si hings asked me to do the sequence of movements of Siu Nin Do or Siu Nin Tao. The anguish came because then, while I was doing it, they did not pay attention to what I was doing. I thought, if they told me to do it, why did not they pay attention? It was revolting, and my Si Fu Júlio Camacho was one of those who always listened to my complaints. But behind this apparent lack of attention was an intention.

What took me a long time to understand (and it was not too long, I think from 2008 until 2010) is that the sequence of movements itself is formulated so that the Ving Tsun practitioner can try it, and there is no wrong way to experiment. It is possible that older practitioners provide tips, draw attention to certain inconsiderate or other aspects that catch their eye. But if some of these comments are in the sense of a correction or shaping ... danger!

When correcting a practitioner, or evaluating it all the time (which is worse), the hing si or tutor responsible for the practice is inducing to see the sequence from the perspective of who corrects. This goes against the development of Kung Fu. Kung Fu is a particular quest, and the sequence of movements, each according to the nature of its domain, is what enables this quest in a pure way.

Having pure access to the Ving Tsun System goes straight through the sequence of moves. It provides a chance for the practitioner to know the listing and to withdraw learning independently, exploring for themselves the nature of the domain. I see that the patience that my Si Fu had and the good explanations he gave me about the importance of the sequence were only making sense when I understood by my body what a nature would be. And how did I do that? Doing the sequel!

The genesis of the opportune moment

After many years and Kung Fu encounters, I have perceived that exists some moments with different qualities. My Si Fu usually choose, to show these different moments, to apply a void in day-to-day scheduled moments to be occupied by disciple energy. But this void is not introduced abruptly, it is placed gently so that the disciple can appropriate it for his own benefit. The central message provided I think is: Kung Fu ability is to transform all moments in opportune moments. The scheduled moments at the beginning is only an excuse to it.

This message is hard to understand. At first I thought that “to transform all moments in opportune moments I need to have force or ability to submit situations to my desire”. Wrong! What initially Si Fu points for us, that I named “void”, really is the flow of reality itself. That means that the more we try to create moments programmed according to our way without thinking if this moment is the opportune moments, we are increasing the distance between reality and desire. 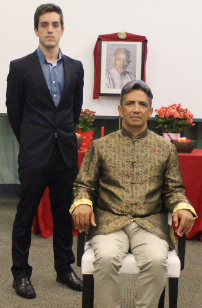